It’s been two weeks since I spent an entire night coding with 25 or so other active hackers at our inaugural AEC Technology Hackathon. I felt the urge to write down my impressions of the weekend and the lessons learned, before the memories fade. Hacking through the night is not a common way to spend the weekend for professionals in our industry. If we really ‘have to produce’, it is much more likely for us to duct-tape Revit models or create renderings and PowerPoint presentations in preparation for the next big deadline, or dreaming up proposals for projects that we would like to be doing in the future. But unlike these long exhaustive hours typically spent preparing for a deadline at work, I have to say that the 27 continuous hours spent at the hacking event were energizing and inspiring; not tiring.

Chien Si is having one of those hackathon moments

The event kicked off at 9 am with 80 people in the room equipped with coffee, fruit and laptops. We could feel the energy from the start, the countdown clock projected onto the wall reminded us that time is finite, and we were ready to produce. Many of us had spent the last days forming teams and exchanging ideas on the event’s group page at hackerleague.org, so that we could get started straight away. For those who hadn’t yet teamed up, we spent the first 20 minutes of the morning with brief introductions and announcements of one’s interests and skills in order to get as many people as possible teamed up in the best possible combinations.

Our fellow CORE studio member Benjamin Howes had proposed to create an open-source web viewer for 3D models by the AEC community, named vA3C (which is short for viewer for AEC [models] powered by Three.JS) , and I had joined his team on hackerleague a few days prior to the event with the hopes of getting my hands dirty with Three.JS and JSON. It was a popular project proposal – we ended up with a team of twelve wanting to develop this piece together. Individuals included our friend Theo Armour, who, amongst many things, is an experienced hacker and avid teacher of Three.JS, Jeremy Tammik (aka the building coder) and Matt Mason as Revit API experts, Kevin Vandecar from Autodesk [3DS API expert amongst other trades], Josh Wentz, who knows all things front-end and JavaScript, Zach Flanders a super creative individual from BNIM, Femi King, who is an experienced hacker and web developer, and our long term Stevens PAE friend Charlie Portelli from KPF. Wow, when do you ever get the chance to work with a group of people of this caliber on a fun project? Probably more often than you think – if only you let yourself… More on this later. 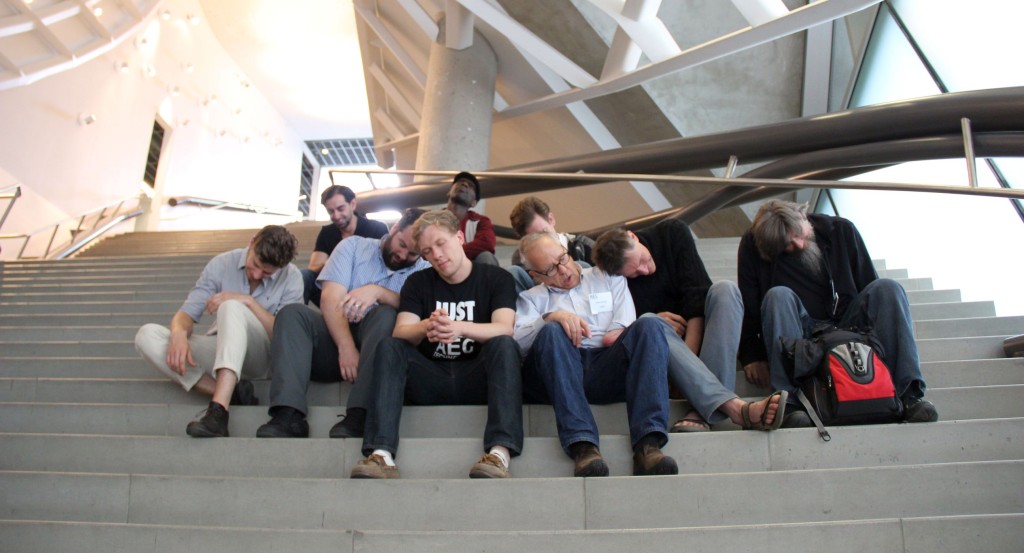 the vA3C team after a sleepless night of hacking

The great thing about participating at an event like this, in a project team that fully supports your interests and thrives to collaborate and teach each other with an open deck of cards is that you are so productive. When barriers are down, contracts are out of the picture, Outlook and Gmail are turned off, and interests align, we can really create something in a matter of hours! Within 60 minutes of kicking off the hackathon, the project was fully defined on a white board, hackers were divided up into groups smaller groups to tackle various tasks, and our project’s Github page and six repositories were created, and all that was left to do was to produce the code. Fast-forward six hours and the first 150 commits to our GitHub project were created, with a couple of thousands of lines of code produced. The interesting thing was that we barely spent any time with meetings, team check-ins and such. It was as if everyone knew what they were supposed to be doing, and most of the communication took place through Github’s fabulous issue tracking system. And for those of us being stranded and lost, it was so easy to find help, inside of our own team, as well as amongst other [competing] hackers in the room. Everyone is in it together – everybody thrives on this collective energy, and is willing to teach and support each other. In the end, we all want to see nice open-source projects come out of this event, so why not support each other? Competition is great for encouragement, but in the end, we all benefit the most, if we collaborate, help and motivate each other beyond our own project teams.

In fact, I don’t think I have ever worked in a collaborative process this seamless – consisting of an ad-hoc team that had never worked together before. Dare I say that Github issue tracking is the solution to all marriage problems? Likely not – but we could surely benefit a great deal if we used it on the team projects within, and outside, our offices.

Another 12 hours later, it’s 4am, and everyone still left in the room has decided to keep pounding coffee until it’s time to pound beers later this afternoon…. The room is very quiet at this point, certainly the low of the entire event, but we are probably still 4 times more productive as we are on any given day at the desk, with Outlook, GChat and chatty colleagues competing for our attention. Luckily the sun rises early during this time of the year, and with it comes another breeze of fresh energy, and the reminder that it’s a new day, and the hackathon deadline at 12pm is just around the corner.

The finishing touches are put into the project, as the room starts filling with familiar faces from the previous day, all freshly showered and groomed, wanting to help out with the last outstanding items before it’s time to present the results.

And those results clearly spoke for themselves. Nine different projects had been created to a polished finish – all very diverse in nature, from iPhone apps to mind readers that controlled the lighting in the room, to a map of NYC that highlights which buildings are up for LL11 repairs next, to a suite of tools allowing you to drive a robotic arm straight from Dynamo, to a complete open-source parallel-processing infrastructure that allowed its creators to run a few thousand energy analyses, using EnergyPlus, in a matter of minutes, powered by Amazon’s super computers.

The latter project, titled Pollination which is capable of running more EnergyPlus models in a day than a midsize energy consulting firm can run in two decades, took home the first prize – a Microsoft Kinect sensor for each participant.

Afterwards we had a few rounds of applause and a discussion of lessons learned at this event, and then it was time to celebrate the end of our hard work with a few beers at a nearby bar. But the weekend did not end here…. By the time I woke up the next morning, GitHub had populated my email inbox with 10 or so notifications from my vA3C colleagues, and I realized that this was only the beginning of working in a new team, without contractual and monetary motivation, only driven by the joy of coding, the urge to invent a new tool, and the curiosity of wanting find out where this open-source project could lead to….

OK it’s true – I was tired, and I even took Monday off to ride my bike into the nature [route 9W into New Jersey and up to scenic New York State]. But, as I was riding, my brain wouldn’t stop thinking about what had happened this weekend. I became part of a dream team spanning from Switzerland to San Francisco, new found colleagues probably for years to come, developing at a speed that no project manager could track, in their own time, and in their own interest. I think that, if this were a planned effort coming out of any of the R&D groups in our offices, this project, as it stood a day and three hours after it’s commencement, would have taken us at least six months to develop – blocked by incoming emails, proposals, and, yes, the act of writing blog posts such as this one… Anyways, one thing is clear: We should be hacking much more often! I think that everyone in the CORE studio agrees that a consolidated and focused 24 hours of effort can fast forward any dream into well-working prototypes, even if, technically, there’s no free time in your calendar to take on yet another fun project… And there are many of these dreams left to be realized.

Dear colleagues from our industry – we should all hack more, play more, talk more, share more. All we have to do is do it.

And, yes, we have heard and said these things before…

One Response to “all you have to do is DO IT”