The CORE studio team supported 360 Architecture with the design of a series of curvilinear glass façade elements for the in-process Oilers arena in Edmonton, Alberta.  360 contracted us to perform the technical modeling, surface rationalization, and warpage analysis to allow the glass apertures to be built using cold-bent, quadrangular, insulated glass panels.  As we have done quite a bit of this work in the past in collaboration with our Façade Engineering team, we were excited to assist!

360’s design intent is to subdivide the apertures into a pattern of parallelogram [glass] panels. The main question we are trying to answer for each aperture is what are the ranges of angles and panel sizes that result in buildable (meaning that each piece is flat enough under our failure criteria) configurations?  360 shared their arena surface model and their in-process parametric models (which they were using to generate the quads using surface subdivision techniques) to get us started.  The design parameters they are interested in exploring are vertical mullion angle, horizontal mullion angle, vertical length, and horizontal width. 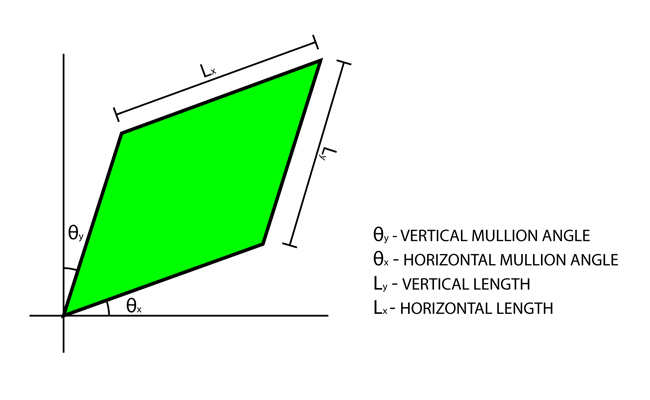 ACM started by analyzing a few of 360’s initial proposals.  There was a wide range of panel warpages (many of which were failing under our criteria), and a large variation in the panel sizes.  A more in-depth survey of 360’s models led us to the initial conclusion that either the surface subdivision logic had to be changed, and/or the surface geometry had to be modified.  In our past experience in this vein, we have used Galapagos to optimize the input surface geometry so that when subdivided, the panel warpages are acceptable.

We’ve been referring to this internally as the top down approach: design a good surface, and slice it up in such a way that the pieces are flat enough to build.  While this workflow is effective, it is extremely compute-intensive to optimize a ‘good surface’; it takes a long time to evolve one good answer, and you can only investigate one set of design parameters at a time. We weren’t looking for one good answer that takes a long time to find; we were looking for a range of possible solutions dependent only on the design parameters while maintaining 360’s geometric original design form.

While the top down approach was feeling particularly daunting, we thought of a way to address the challenge from the bottom up: what if we could use techniques like form-finding to find good configurations?  We turned to Kangaroo, a physics simulation plugin for Grasshopper, to give the bottom up approach a shot.  ACM developed the tools we needed to drive the form-finding process based on our constraints, and to check for fitness based on our design performance criteria on top of Kangaroo and Grasshopper.  The video below shows a partial run of one of the apertures using Kangaroo as a platform, along with our custom toolset.

The results spoke for themselves as soon as we had a working prototype.  The planarity and range of panel sizes were improved dramatically, and as the approach was much less compute-intensive, we were able to explore entire ranges of solutions in very little time.

Along with the ability to specify the main design parameters described above, the bottom up approach allows for the application of planarization and smoothing forces to the panels in the system.  All of these forces act concurrently – and in some cases unpredictably – on the system during the form finding process, allowing us to weight our constraints based on their systems level importance.  For example, value systems like ‘all warpages have to be acceptably flat, we want to minimize panel size variation, and we want our angles and lengths to be w, x, y, and z’ are easily translated into a series of forces to drive the form finding simulation.  This is what makes the bottom up approach so powerful – all of the constraints are considered in parallel and a higher order behavior of the system is allowed to emerge that satisfies those constraints.

This exercise opened up a lot of doors for ACM. The ability to author customized, rule-based programs using lightweight digital form finding tools such as Kangaroo provides new ways to solve engineering and design problems. We proved that we are able to find buildable ranges of solutions to this common design pattern (quad panels over a curved surface), at any stage of the design process, and in very short order. We are excited to see where this capability takes us.