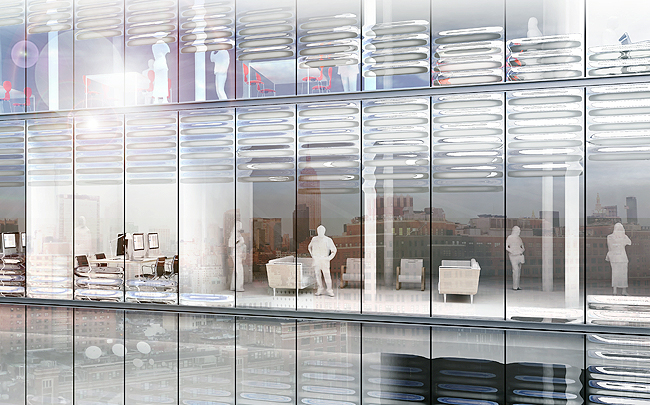 Ennead Architects recently approached us to collaboratively submit an entry for a custom designed self shading insulated glazing unit for the TexFab competition. Over the course of two weeks, Brian Guerrero and Aniju Varughese from our building skin group, Colin Schless and Vamshi Gooje from our sustainability group and Jonatan Schumacher and Robert Otani from the Advanced Computational Modeling Team collaborated with five architects of the R&D entity EnneadLab to design an innovative IGU. The proposal was based on a research project that Ennead had previously started internally, and they saw the TexFab competition as an opportunity to continue their previous efforts. Ennead was also very interested in teaming up with our Skin, Sustainability and ACM groups for enhanced research opportunities.

The project description below and the graphics were created together with Zach Olczak, Daria Supp, Brian Masuda and Jeff Geisinger over at Ennead.

The Concept
IGU’s have long been established as transparent façade elements that can control thermal heat transmittance, often in conjunction with additional shading elements. The goal of this initiative is to minimize the use of extraneous materials by focusing on manipulating components and surfaces that are already part of a conventional IGU to achieve self-shading properties. Using integrated computational design-analysis techniques and digital fabrication methods, the team proposes to develop site and program specific IGUs designed from slumped glass with localized opacity variation.

SSIGU makeup
The proposed triple-glazed, structural IGU is comprised of a slumped outer lite with an opacity zone on the number 2 surface, an intermediate float glass lite, and a structural laminated fully tempered inner lite with ionoplast interlayer. The air spaces within the lites are gas-filled, and the number 3 and 5 surfaces receive low-e coating for additional thermal efficiency. The structural inner lite is dead-load anchored at the base to each floor slab with a built up steel channel “shoe” with cementitious grout. The IGU head is laterally anchored at the head with a discrete steel angle, and the vertical joints are structurally-silicone glazed, giving the resultant curtain wall a minimal frameless appearance on all four sides. 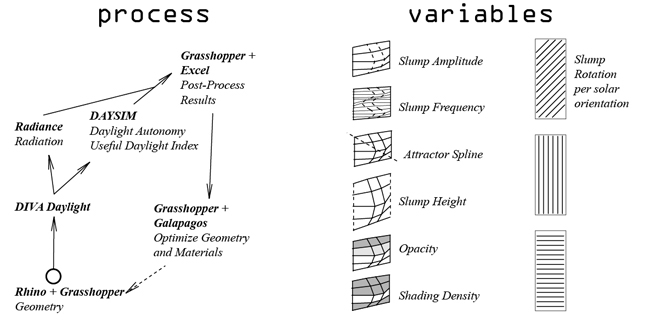 The workflow across software and variables tested.

To model the complexity of the proposed design, the proposed slump panel was set up with seven variables: slump amplitude, slump frequency, slump height, shading density, an opacity value and attractor splines to control programmatic influence. Each of these variables is controlled by a simulated annealing algorithm in Grasshopper’s optimization tool Galapagos with the goal to find an optimized combination between Useful Daylight Index (UDI) and solar radiation to balance the need for shading in the summer, heating in the winter, and day lighting. Based on the results of this optimization, appropriate designs were adopted. The attractor splines are controlled by the designer to define glazing areas in need for particular transparency, and fed into the optimization procedure.

It is important to note that the team used UDI, a progressive metric used to evaluate daylight.  Older metrics like foot-candles or LUX took into static conditions, expressing lighting levels for a given point in time (generally a worst-case scenario of uniform overcast sky conditions).  UDI takes into account the dynamic climatic conditions that occur over a typical year and express results as a % of occupied hours that a range daylight levels are met. This results in a far more accurate and useful evaluation of lighting quality and quantity in a given space.

Structural Performance
The SSIGU takes advantage of the maximum slump allowable in the glass manufacturing process to improve structural performance. The stiffness provided by the curvature allows thinner lites of glass as well as minimal support structure. Curvature in the vertical direction can eliminate the need for vertical mullions for support structure. Curvature in the horizontal direction will minimize the size of the vertical mullion support. 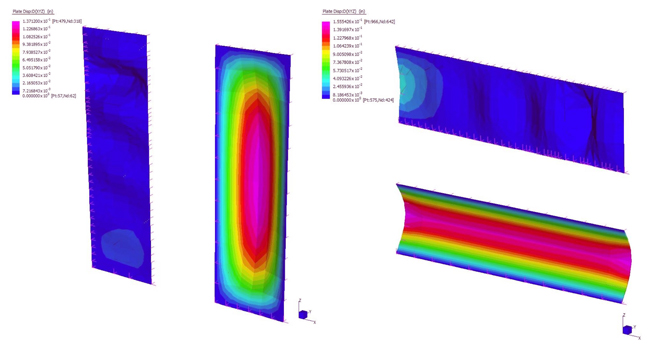 Fabrication
Our proposal aims at reaching new limits with glass slumping technology. In the fabrication sector today, few methods exist for creating a slumped panel with slump depths necessary to create a highly varied curvature. To challenge potential fabrication limits, we conceived of a slumping method that utilizes an adaptable ceramic bed and a set of coils whose activation and temperature outputs can be digitally controlled to accommodate an infinite set of slump profiles.