Since the rise of building information modeling, engineers have been working on projects in a growing number of software programs that are designed to facilitate ever more specialized tasks. Platforms such as Revit, Grasshopper, Tekla, Ram Structural Systems, ETABS, and SAP 2000 have given the field increased capabilities and efficiencies in all stages of the project engineering process, whether it be defining geometry, analyzing loads, documentation or fabrication. However, when multiple team members, often in geographically distant locations, are working on a single project across multiple platforms there can be breakdowns in coordination and communication. Work can accidentally be done on out-of-date models. Simultaneous and contrasting changes can be made unbeknownst to the team until it’s too late. And then there is simply the hassle of going back and forth between platforms to ensure that the models are consistent with one another. 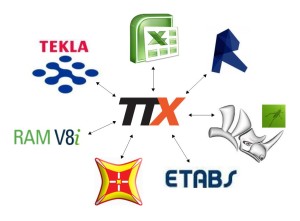 It was to solve these inefficiencies in communication and collaboration while working across multiple BIM platforms that we at CORE studio began developing TTX, our in-house interoperability software. Starting in 2011, CORE studio sought to create a means for making two-way changes to models during all three stages of the project engineering process: defining geometry, analyzing loads, and documentation. To do this, TTX establishes a database that stores every update made to a BIM model in any platform, maintaining an up-to-date record of the condition of a project. It automatically translates the updates to other software platforms when they are used to open the model. So if a Revit model is updated in Tekla, it can be brought back into Revit, where TTX will update the Tekla changes automatically from the information stored in the database. This sort of automatic back and forth translation can be carried out as many times as necessary, in as many software platforms as are needed to complete the project.

The next series of blog posts will introduce a number of apps developed at the CORE studio that help engineers at Thornton Tomasetti to collaborate better.

When we first created it, TTX started out as our structural BIM interoperability platform. Its purpose was to bi-directionally exchange model information between our most commonly used structural analysis and modeling packages. Since we started using a database back-end, we could also keep track of each project revision: every time a project is synched to the TTX database from any of its currently supported programs—which include Revit, Grasshopper, Tekla, SAP and very soon RAM and ETABS—a new database entry is added to the TTX project. This entry contains information about the application that synched to the database, such as the sync date, user name and a user-defined message describing the latest change. It might look something like this:

In addition to this information, we keep track of every element that was created, deleted or modified.

Now, the CORE Studio team has created a revision history interface in Grasshopper, which lets the user parse the individual timestamps of the project and review what was changed, when and by whom. Using the Grasshopper interface we can also compare the stage of the project at different time intervals. We can also run custom queries on the model, such as, “Show me all the changes that we made in May.” Or: “Show me all of the changes that were made by SAP or ETABS.”

Another great byproduct is the ability to roll back all models to an earlier time period in the project.

We also created a number of tools that allow us to run very quick queries on the model. Based on our selection of the element type and one or more conditions for a certain element attribute, the tool returns all elements where this condition is met.

For example, one could extract all elements of type Beam, where the section name contains “W14” and the rotation angle is between 90 and 180 degrees.

For all models that run through a structural analysis, we also collect member forces in the TTX database. This means that we can let the query return all member forces where, let’s say, the axial force is between 10 and 20kN. BIM and force queries can be combined this way.

The best part of developing these plugins for TTX is that our engineers constantly come up with new ways of using the platform. We imagined that it would be used for interoperability, but more and more it is being used for iterative capturing of analysis data. I am curious to see what this will lead to next.

The CORE studio group is proud to announce that TTX, our new interoperability platform, is in the wild. We’ve released a series of alpha builds for our designers and engineers to use in-house, and have received great feedback from our first round of testers.

One noteworthy test featured a stadium model in Rhino, which had more than 10,000 structural members, that needed to be translated into Revit and Tekla. TTX successfully ported all data into Revit and Tekla. Translation times varied, however, due to API and general application performance (we’re looking at you here, Revit). 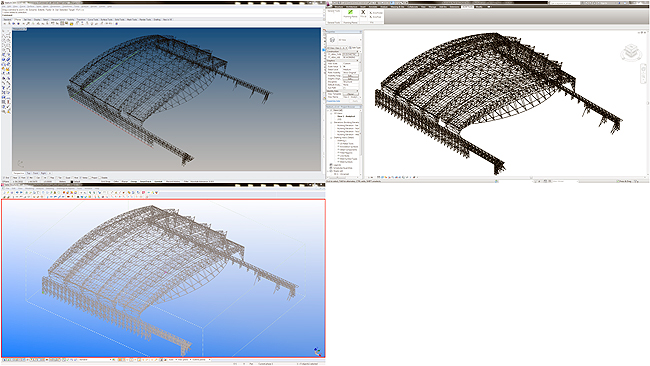 The TTX development team will continue to progress the platform over the coming months. We are hard at work on our first beta release, which should roll out for internal testing in late September. A major component of that release is support for SAP2000, a structural analysis package.

The video below shows how a very common – and typically linear – engineering/documentation workflow can be distributed using TTX. Whereas other translation workflows do not allow the documentation process to proceed efficiently until the engineering analysis and design is complete, TTX allows multiple users to make progress in parallel and to synchronize models at any point.

It has been almost two months since we announced TTX here on the Thornton Tomasetti blog, and we figure it’s high time for an update! We have been hard at work on the platform and had the pleasure of sharing some of our recent progress at ACM’s AEC Technology Symposium at the Center for Architecture last month. It was great to see our contemporaries working through some of the same challenges that TTX addressed at the conference: interoperability, cross-platform updates and collaboration.

The three videos below show some of our latest progress. We currently have provided the ability for Grasshopper, Revit and Tekla to participate in round-trip updates with a central TTX database, and are busy wrapping up this phase of development in preparation for in-house alpha testing on some real-world projects. Check back soon for more updates over the coming months.

CORE studio is developing a new interoperability platform called TTX.  Interoperability is at the core of our group’s work, and has long been recognized within Thornton Tomasetti as an imperative goal.  In 1990 Charlie Thornton said “We now have to zero in on the key issue, the Achilles heel of [structural] computer programs … compatibility”.

While we have made great progress in this space over the past two decades (and especially in the past three years or so), the gains we’ve made have been more technical than cultural.  Although it’s great to be able to translate an analytical model into a fabrication package, that ability doesn’t fundamentally change the way an engineer and a detailer design a project together.  The goal of TTX is to provide a platform that enables a new type of collaboration during the design process – one that allows for real time, cross-platform updates of project information.

Currently, we employ a wide range of tools to translate project data from one platform to another.  We’ve written about our love for the Geometry Gym SSI toolset before and continue to use the tools very frequently.  We’ve also been experimenting with IFC on a few projects, using commercial IFC translators – most notably GeometryGymBIM – with varying levels of success.  Additionally, the predecessor to our group – Integrated Modeling Services – developed a suite of custom translators specifically tailored to our internal needs that have been widely used over the past three years.  The diagram below describes some of our typical translation routes. 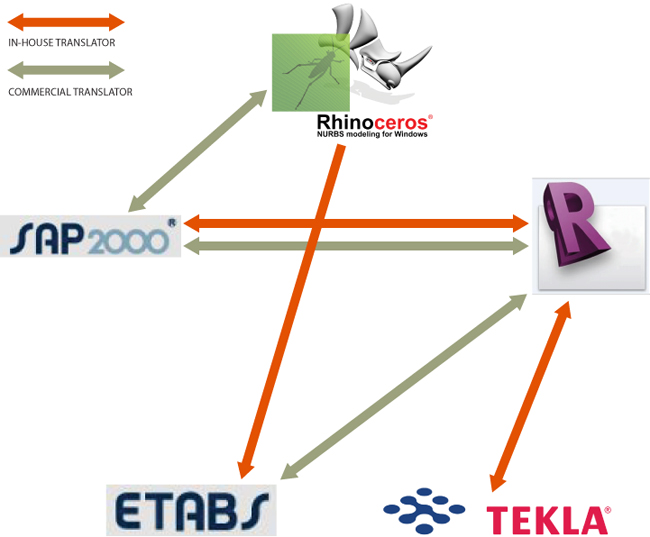 There is one critical bit of functionality missing from all of the translators described above: the ability to update a model.  All translation methods are whole-hog imports; models cannot be updated to reflect changes made in another model, they can only be overwritten.  This is fine in the earliest stages of the design process, but as more information aggregates in various and disparate BIM, analysis, and fabrication packages, overwriting these data-rich files becomes impractical.  For example, if a draftsperson has been tagging and adding annotations to a Revit model and the model needs to be updated via a translation, all of the tagging and element-specific annotations would need to be re-done.  Similar issues exist in analysis and fabrication packages. 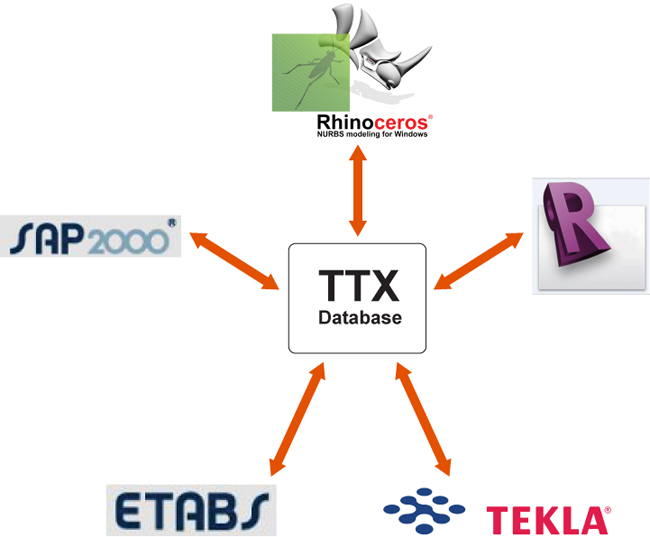 This is precisely where TTX comes in.  By moving all of the critical project data into a central database, and providing read/write/sync capabilities across our typical software stack, TTX allows project team members to focus on their respective specialties in the platform of their choice.  Concerns about model synchronization, our long standing ‘compatibility’ issue, are allowed to fade into the background.

So far we have Grasshopper, Revit and Tekla all talking to each other via TTX, and have proved that cross-platform model updates are possible using the platform.  Stay tuned for more TTX updates over the coming months.  We are very excited about the platform’s potential, and will continue to share our progress here on the ACM blog.