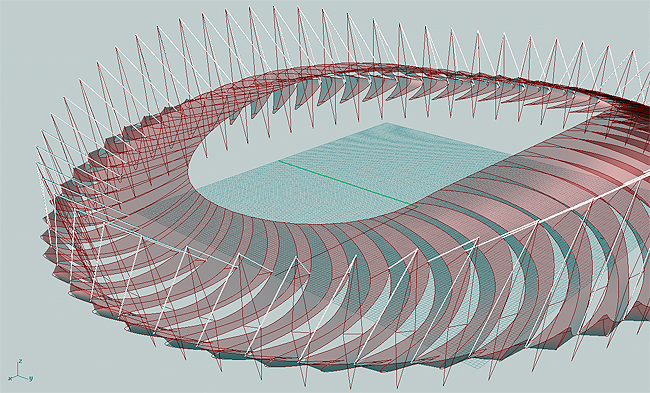 Grasshopper-designed roof of the Al Menna Sports Complex in Iraq.

The smart structural interpreter (ssi) tools for Grasshopper changed the way that we engineers look at modeling. We first tested the ssi plugin in 2010, when we were searching for the fastest possible way to design a stadium roof structure with SAP. Our challenge was to submit a detailed set of drawings for a competition proposal for the fabric roof system of the Al Menaa Sports Complex in Iraq.

We spent three days at the offices of 360 Architects, sitting together to generate a parametric model of the roof that would allow us to study different design scenarios, both from an architectural and structural perspective. On day four, we used the ssiSAP interpreter to assign structural material properties to our wireframe geometry, and then to ‘bake’ this into SAP to run analyses. The analysis in SAP is set up relatively quickly for a project such as this – the bulk of the time spent would have been in creating the geometry. As such, typically in the competition phase of a project, engineers would not be able to run multiple analyses, which might help to understand and improve the design.

The model was translated from SAP to Rhino using the ssi plugin.

Through Jon Mirtschin’s tools, we were able to run four of these iterations in one afternoon – at which point we were happy with the performance of our design. On day five, we used our in-house developed SAP to Revit translator to bring the geometry into Revit for documentation.

This proposal turned out to be successful and the stadium in now under construction in Basra, Iraq. But it also turned out successfully, as it changed the way we look at Grasshopper. In 2010, a lot of what we saw it being used for was the creation of complex architectural surfaces. But now, with the addition of the Geometry Gym tools and many other analysis-centric plugins, Grasshopper becomes our preferred modeling environment for engineers of numerous disciplines.

Now, more than two years after testing the Geometry Gym suite, we find ourselves working with the tools on a daily basis. Jon Mirtschin continuously pays very close attention to our requests for improvement. He has since added the ability to set up the entire analysis model for most common structural analysis programs, and to even query the results back into Grasshopper. See below a simple demo, where we use Galapagos to find an optimized roof layout based on weight and deflection criteria.

In the ACM group, we have given numerous workshops to TT engineers to learn how to use Grasshopper and the ssi tools.

Jon is also a big supporter of the Industry Foundation Class format. He uses IFC to tackle the connection between Grasshopper and Revit. Seeing how Jon pushes this exchange file format, we now believe that IFC is the best possible file exchange format to be developing.

Whilst the IFC format has been around for almost 20 years, it has struggled to gain acceptance in the industry it was designed for due to a myriad of complex international standardization issues, but mostly because it didn’t work so well at what it was designed to do. Continued development of the standard by the Building Smart Alliance and the recent release of the IFC2x4 schema, we believe will eventually lead to the realization of the promise of true cross-platform / discipline model interoperability. In the meantime however, nimble developers like Jon have latched on to its potential and are pushing the ball forward a lot faster than the larger organizations ever could (I’m looking at you Autodesk).

The three stages of data tracking.

We recently utilized Jon’s first foray into IFC translation with a project requiring significant data tracking, from model generation through analysis to documentation. We saw the GeoGym Tools as a means to insert our own IFC data (in this case the member name tags destined to appear on the Revit page) into the workflow at the structural model generation stage. This was at first a response to the extreme time restraint’s placed on the project but eventually morphed into an appropriate way to manage both geometric and analytical data in a format that our clash detection and documentation software could handle (Revit and TeklaBIMSight respectively). Here again, we at Thornton Tomasetti can’t praise enough Jon Mirtschin’s efforts in assisting us on this project as the move to Revit was only possible with his new Revit IFC Importer, and the development of a SAP to IFC workflow was also a special request.

The typical workflow across software to generate, analyze, and document a project.

The above diagram represents the workflow we settled upon for this project, and is essentially the ‘software’ version of the above Generate + Analyze + Document diagram. As usual, GeoGym software proved invaluable in providing for both data and geometry movement between the various software with the ssi Tools ensuring that the model we parametrically generated was indeed the same model used for analysis, and the IFC Export/Import process allowing for both clash detection and documentation in Revit.